The global sanitation crisis finds an unlikely and eccentric hero in 60-year-old Singaporean Jack Sim, also known as Mr. Toilet. By blending a lighthearted sense of humour with some compelling and unnerving statistics, he cuts through the cultural taboos of a topic that tends to make people uncomfortable. That discomfort, however, comes at a deadly cost. Nearly a third of the world's population is put at risk by lack of access to proper sanitation, be it unsafe outdoor conditions or improper sewage systems. While Jack's efforts are on a global scale, a major part of his advocacy is focused on India, where 200,000 children die each year from poor sanitation and women are assaulted in public spaces for lack of private bathrooms. Mr. Toilet faces large corporate fights and thinning resources, but his sense of fun and fervour reveal a determined hero that the world needs more than ever. - Gabor Pertic 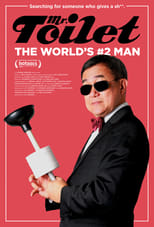